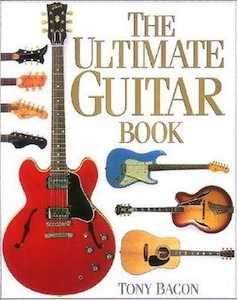 Ah, The Ultimate Guitar Book. In many ways, this is where it began. I was still working for Making Music magazine when Nigel Osborne and I were commissioned by Dorling Kindersley to “produce a stunning guitar book”. I don’t think those were their exact words, but it was along those lines. I think we exceeded the brief. Not that I was ever happy with the Ultimate title, but that was the DK series into which this book fitted, so we had no choice. Few things are ever ultimate. Not even this.

But it did create some waves. For a start, I’m pretty sure that when we released it in 1991 it was the classiest guitar book that had ever been published. It sold a lot of copies. It came out in loads of non-English language editions. It was great fun to make. And it made Nigel and I think, well, yes, we should do this for ourselves. DK was definitely a major. We wanted to set up an indie. And that’s how we came to create Balafon (which became Backbeat) and start publishing our own books … beginning with The Fender Book and followed by all the others you see represented here.

Now you’ve come all this way, you might want to click on the link here and read a magazine column I wrote on the 20th anniversary of the UGB’s publication.

That should give you a flavour of what it was like to make the book and some of the people who helped it on its way. It was a great opportunity, and I’m glad we made the most of it.