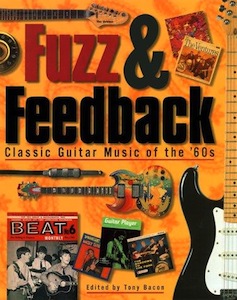 Fuzz & Feedback, which appeared in 2000, was a re-titled and new-jacketed edition of Classic Guitars Of The 60s (original jacket below) which we’d put out three years earlier. Otherwise it was exactly the same.  We did the same thing when Classic Guitars Of The 50s magically turned into Echo And Twang (more on that one here). 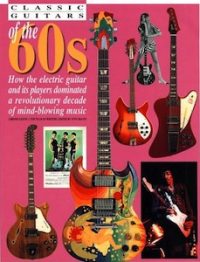 The idea was to combine a magazine-like editorial approach with the high-quality illustrative look we’d already established.

I rounded up good writers on the guitar and briefed them each on a 60s-related chapter to write for the book: Charles Alexander on jazz; Tom Wheeler on American guitars; Paul Day on European guitars; Michael Wright on radio and television; André Duchossoir on Gibson; Walter Carter on Fender; Charles Shaar Murray on rock and pop; Tommy Goldsmith on country; Hiroyuki Noguchi on Japanese guitars; Paul Trynka on blues and soul; and John Morrish on recording. Dave Gregory wrote a glowing introduction to it all, and I wrote a chapter on Beatles guitars.

I had everyone choose a couple of favourite tracks from the 60s and write a short note on each, and you can read them by clicking on the link here. There’s another link there to let you go and hear them all at Spotify if you have that facility.

Everyone did a great job, and it seemed to me that the result was just as I’d intended: a multi-angled view of the guitar in the 60s, its importance in various styles of music, and all the great and not-so-great players and  instruments that helped to create that music.

I’m still particularly proud of this one and its companion, Echo And Twang, because there’s never really been anything like them. I think they were a good combination of my magazine experience and Nigel Osborne’s design experience (although it was Sally Stockwell who actually put the look together).